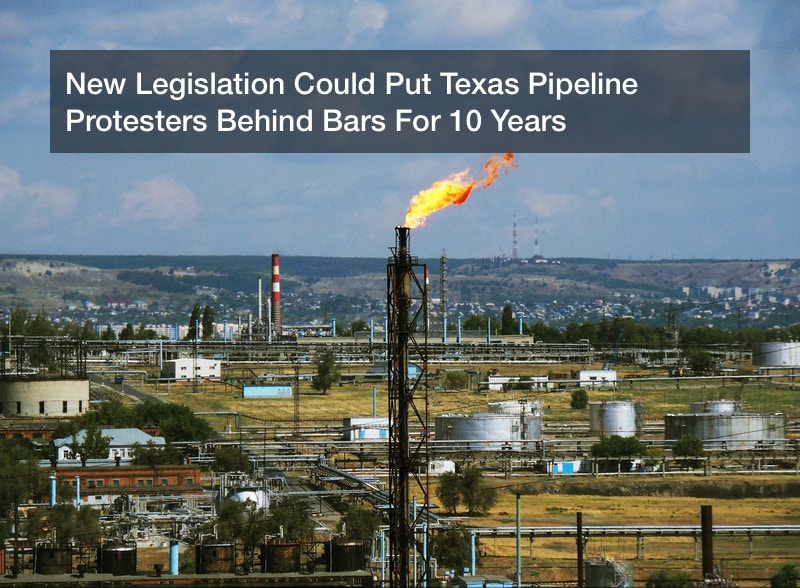 Every year, more than 4 billion metric tons of oil is produced globally, and gas and oil together power 60% of U.S. energy consumption. Much of that oil and gas is extracted in Texas, which is typically friendly to oil and gas industries, a major economic driver in the Lone Star state. To protect those interests, state lawmakers recently passed legislation to protect oil pipelines in Texas.

Texas lawmakers in both chambers of the state legislature just approved legislation that criminalizes certain actions of oil pipeline protesters. Under the new legislation, any protester who interrupts operations or damages equipment could potentially face up to 10 years in prison.

According to the legislation, protesters who are found guilty of delaying the construction of an oil pipeline or halting its service could be charged with a third-degree felony. A felony could also be charged to anyone found guilty of these actions against pipelines for natural gas, a resource that powers up to 66.7 million homes in the United States.

Under federal law a third-degree felony is punishable by serving anywhere between two to 10 years in prison. For reference, this is the same sentence that drive-by shooters who miss their targets face when found guilty.

The measure is meant to protect the pipeline companies that build the 72,000 miles of crude oil lines in the United States. According to the proposed legislation, pipelines would be classified as “critical infrastructure,” which is the same category that covers power plants and water treatment facilities. The Texas Oil and Gas Association is in support of the bill’s passage because of this protection.

The biggest opponents to the legislation are environmental groups. They view the bill as an attack on the protesters’ right to freedom of speech.

“The bill was never about safety and security. It was about silencing protesters trying to protect their water and land,” Cyrus Reed, interim director for the Sierra Club’s Lone Star Chapter, said in an email to Bloomberg.

Texas isn’t alone in putting this bill through its legislative bodies. As of early 2018, there were 58 anti-protest bills moving through the legislatures of 31 states. Similar legislation has already passed in Iowa, Oklahoma, North Dakota, South Dakota, and Louisiana. All of these bills come in the wake of the Dakota Access Pipeline protests that took place during the summer of 2016 and the decade-long battle over the Keystone XL pipeline. Considering dangerous materials like asbestos (of which 804,000 tons were abated in 1973) and lead have historically led to harm in the areas in which they’re used. Protesting other harmful materials, or a pipeline, is a behavior protected by the constitution.

These bills, however, are being met with opposition. A lawsuit was recently filed in federal court in Louisiana to challenge the critical infrastructure law. The lawsuit alleges that the law allows authorized personnel to prohibit people from any of the 125,000 miles of mostly unmarked pipeline in the state. This prohibition could even include public places like sidewalks and roads if a pipeline crosses there.

According to the lawsuit, the broad and vague nature of the law is unconstitutional because of these potentially wide-ranging exclusions. The lawsuit alleges that the legislation is so broad that it could even bring felony charges against a landowner for being on their own land if there is pipeline underneath. Although 84% of those who have invested in real estate have said that they will likely make another real estate investment, a punishment like this certainly wouldn’t encourage that investment.

As the crude oil industry continues to grow, those who rely on the industry’s revenue are sure to only throw their weight behind the legislation more vehemently. For instance, the global horizontal directional drilling market is projected to reach $14.95 billion by 2022. This growth gives those in this associated field plenty of reason to side with the oil companies.

In Texas, the controversial bill still has to get Governor Greg Abbott’s signature before it becomes law. Until then, groups like the Natural Resources Defense Council plan to voice their opposition to the legislation. With almost 40% of those surveyed by the National Association of Home Builders saying that they would like to own an environmentally friendly home, many homeowners and potential protesters are sure to side with these eco-friendly groups as well.

Are You Using the Wrong Type of E Cigarette to Quit Smoking?

Florida Is No Longer Exclusively For Retirees, Millennials Are Heading South As Well