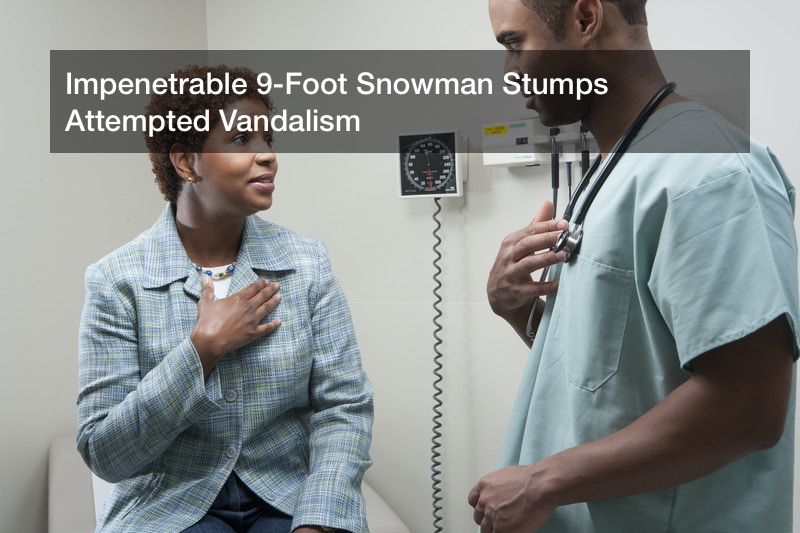 Cody Lutz, his fiancee Lucy, and her sister Laura topped off a fun-filled snowy weekend in Petersburg, Kentucky by building a snowman that reached a massive nine feet. But when a passing driver attempted to destroy this symbol of winter-time fun, they felt an instant dose of karma.

When Lutz came home on Monday he found a set of tire tracks in his yard that led right to Frosty’s base. The bark of the previously snow-covered stump was exposed and there was a suspicious imprint of a vehicle’s bumper. Evidently, the driver of the vehicle hit quite the surprise when their bumper made contact with solid wood, instead of destroyable snow.

They used a stump in the front yard of Lutz’s home as their foundation and stabilizer. The group named him Frosty, built him up to his full nine feet, and threw a top hat on his head to complete the look. While this DIY wintery lawn ornament doesn’t quite fall under the professional landscaping that can raise a property’s value by as much as 12%, the group’s snowman was an impressive structure, especially by Kentucky’s standards. The area isn’t widely known for its snowfall and Lutz’s small family certainly enjoyed what winter offered on the weekend of January 12.

“Apparently Frosty had been handing out life lessons to some very-surprised 4×4 vandals. ‘You reap what you sow!’ Still standing, and still smiling, Frosty certainly had the last laugh!” Lutz joked.

While Kentucky isn’t widely known as an area that often sees snow, there was a substantial amount on the ground the weekend of Jan. 12.

According to Lutz, who is from Buffalo, NY and is well-versed in all things snow, Lucy was delighted to experience the biggest snowfall that she had ever seen. The three certainly did every snow-related activity in the book. To make the most of the Kentuckian winter wonderland, they went sledding, had snowball fights, and built the giant snowman in question.

According to Lutz, people would honk their horns and wave as they drove by the impressive snowman. The three were under the impression that the community loved the snowy addition to the neighborhood.

While the would-be vandals didn’t hit something as hard as concrete, which fractures at 400 PSI, the family hopes that the encounter with a wood snowman teaches them a valuable lesson.

“Instant Karma! It’s hilarious! You know, what goes around comes around, in good ways and bad ways. So, I guess everyone learns a valuable lesson here from Frosty,” said Lutz.